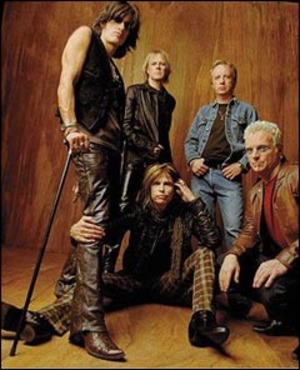 Aerosmith is a prominent American hard rock band, regarded by some as "America's greatest rock and roll band".

Although they are known as "the bad boys from Boston", none of the band's members are actually from that city. Three of them, Steven Tyler, Joe Perry, and Tom Hamilton, had originally met in Sunapee, New Hampshire in the late '60s, but had not yet formed a band together. Tyler was from Yonkers, New York, Perry from Hopedale, Massachusetts, and Hamilton from New London, New Hampshire. In 1970, the three decided to form a band and decided that Boston, Massachusetts would be the ideal base.

Guitarist Brad Whitford and drummer Joey Kramer rounded out the lineup, and the band released their eponymous debut album in 1973. The band created a string of ground-breaking hard-rock albums and enjoyed major popularity throughout the 1970s, but their serious substance abuse and drug addictions contributed to their decline. Joe Perry and Brad Whitford left the group, and the period from 1979-1984 was a dark one for the band, which carried on with replacements. However, in 1984, chiefly due to the tireless efforts of Joe Perry's then manager, Tim Collins, to reform the original band, Aerosmith was born again. Collins succeeded in helping the band resolve old differences and ultimately overcome their addictions. Since then, Aerosmith have remained sober for over 20 years, and have achieved a level of sustained success that has well eclipsed their 1970s heyday.